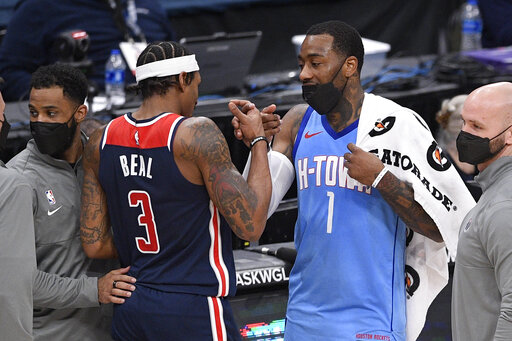 WASHINGTON (AP) - Bradley Beal scored 37 points in an entertaining matchup with ex-teammate John Wall, and the Wizards beat the undermanned Houston Rockets 131-119 on Monday night in Wall's return to Washington.

Wall, traded in December for Russell Westbrook and a first-round pick, had season highs of 29 points and 11 assists for the Rockets, who were missing leading scorer Eric Gordon along with Victor Oladipo, Christian Wood and P.J. Tucker. Houston dropped its sixth straight.

Westbrook had 16 points, 15 assists and 13 rebounds for his sixth triple-double of the season - his first in a Wizards win - and 152nd of his career.

Davis Bertans added 18 points on 5-of-6 3-point shooting for Washington, which won consecutive games for the first time this season.

RJ Barrett added 21 points and rookie Immanuel Quickley had 16 for the Knicks.

Trae Young had 23 points and eight assists for the Hawks, who dropped their fourth straight and seventh in the last eight games.

INDIANAPOLIS (AP) - Zach LaVine scored 12 of his 30 points in the fourth quarter to help Chicago force overtime, and the Bulls then pulled away from Indiana.

Chicago had lost 10 straight against Indiana and eight straight on the road in the series.

Domantas Sabonis scored 25 points and Malcolm Brogdon had 23 for the Pacers, who had won two in a row.