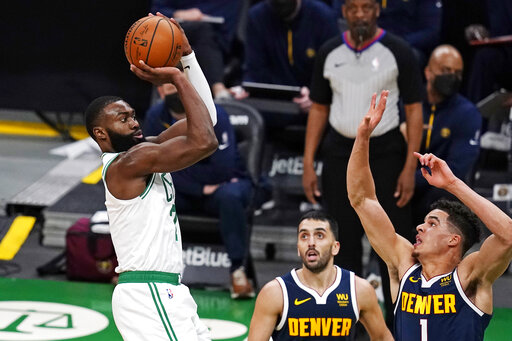 BOSTON (AP) - Jaylen Brown had 27 points and eight assists to help the Boston Celtics withstand a 43-point night from Nikola Jokic and beat the Denver Nuggets 112-99 on Tuesday.

It was Jokic's third 40-point game of the season. Jamal Murray added 25 points but Denver had its three-game winning streak snapped.

The Celtics led by as many as 15 in the first half and took an 11-point edge into the fourth quarter. Denver briefly got within seven points, but couldn't string together a run down the stretch.

It left Jokic to pick up the offensive load and he did his best, scoring 15 of the Nuggets' first 18 points.

But that couldn't offset the energy by the Celtics, who were active defensively and were able to turn 17 Nuggets turnovers into 23 points.

Boston also got a needed jolt from its bench, which outscored the Denver reserves 30-14.

Rookie Aaron Nesmith also had some of best minutes of the season, finishing with nine points, four rebounds and a block. He also helped keep several possessions alive, in one instance in the third quarter by diving to save a ball near the sideline.

Tatum acknowledged after the team's morning shootaround that he has been dealing with lingering effects from his COVID-19 diagnosis last month that sidelined him for two weeks.

He said he's had some respiratory issues that have caused him to tire more quickly at times since his return to action on Jan. 25. The 23 minutes he played in Boston's loss to Washington tied a season low. He's also struggled with his shot during Boston's recent skid, shooting a season-worst 21% (3 of 14) against the Wizards.

Tatum played 33 minutes Tuesday, which is closer to his season average of 35 minutes.

Nuggets: At Wizards on Wednesday.