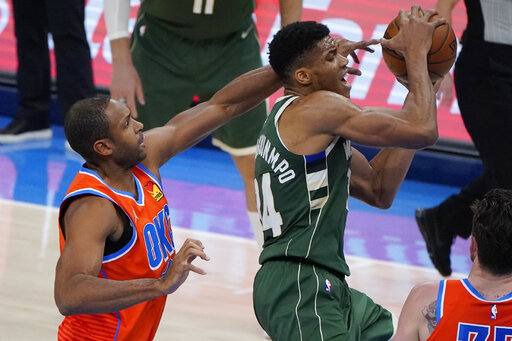 MILWAUKEE (AP) - The Milwaukee Bucks knew when they overhauled their roster that they might pay a short-term price for their attempts to improve their postseason fortunes.

Sure enough, Milwaukee enters an eight-game home stretch well off the pace it established while posting the league's best record each of the last two regular seasons. The Bucks ended a six-game road swing with three straight losses as their record dropped to 16-11. At this point last season, the Bucks were 24-3 and had just completed an 18-game winning streak.

"At the end of the day, there's going to be ups and downs to the season," two-time reigning MVP Giannis Antetokounmpo said Sunday night after the Bucks fell 114-109 at Oklahoma City. "We cannot put our heads down. We have to keep getting better, keep looking forward and hopefully we can peak and play the best basketball we can play when we need to."

Indeed, owning the NBA's No. 1 overall seed hasn't helped the Bucks in the playoffs. Milwaukee blew a 2-0 lead to the eventual NBA champion Toronto Raptors in the 2019 Eastern Conference finals and lost 4-1 to the Miami Heat in last season's East semifinals.

The Bucks made their offseason moves with an eye on performing their best in the postseason as they chase their first NBA title since 1971. Only five of the 14 players who appeared in a playoff game for the Bucks last season remain with the team.

The top of their roster is tougher now that they've added guard Jrue Holiday to team with Antetokounmpo and two-time All-Star forward Khris Middleton. But with so many new players, this team needed time to mesh.

Their 16-11 record is tied with San Antonio for seventh-best in the league. The Bucks remain very much in contention for the top seed in the East, where they're currently in second place, two games behind the Philadelphia 76ers.

Milwaukee could boost its record during this prolonged homestand that begins Tuesday against the Raptors. Even without fans at their home games, the Bucks are 9-2 in Milwaukee and just 7-9 on the road.

"No doubt it's going to be good to get back home and play at Fiserv Forum and be back with our families, back in kind of our comfort zone," Bucks coach Mike Budenholzer said. "But we can't just rely on that. We're going to have to play better and get ready to go."

The biggest issue thus far is on defense.

Each of the p ast two seasons, the Bucks led the NBA in defensive rating, which measures the number of points a team allows per 100 possessions. This season, the Bucks rank 13th in that category.

The Bucks don't appear to have as much overall depth after all these changes. That might not matter much in the playoffs when teams go to shorter rotations, but it can be a major factor in the regular season.

For instance, Holiday has missed the Bucks' last four games as part of the NBA's health and safety protocols in regard to the coronavirus pandemic. The Bucks won at Denver in their first game without him but have lost three straight since and allowed an average of 122.7 points in those contests.

"He's a player that can do it all," Middleton said. "We've definitely missed him these past couple of games."

The Bucks remain confident they have what it takes to contend for a title. They rank behind only Brooklyn in scoring (120.7) and field-goal percentage (.492). They believe they've played together long enough now that they don't need to use all those offseason moves as justification for any struggles.