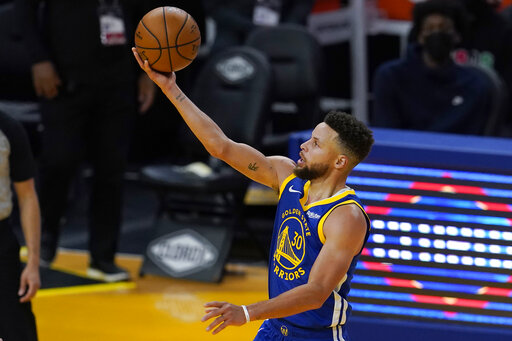 Draymond Green tied his career high with 16 assists as the Warriors sent the Cavaliers to their eighth straight loss.

Curry was 13 for 19 from the floor and 7 for 11 from beyond the arc, and sat out the fourth quarter with the outcome all but decided. The two-time MVP is averaging 37.3 points over his last six games and showing no wear and tear in a season in which he is carrying a heavy offensive burden.

But Green, starting at center recently with James Wiseman and Kevon Looney injured, was just as crucial against he Cavaliers. He consistently found teammates cutting to the basket and led an unselfish offense that piled up 34 assists.

Collin Sexton led the Cavaliers with 23 points. Cleveland shot 38.9% from the floor and was winless on its five-game road trip.

Cavaliers: Taurean Prince (ankle) sat out the game, with Cedi Osman taking his spot as one of the starting forwards. ... Isaac Okoro went down hard in a collision on a second-quarter drive to the basket. He was tended to by trainers on the court and left the game. He returned in the second half.

Warriors: Curry has hit at least one 3-pointer in 90 consecutive games, passing Dana Barros for the fourth-longest 3-point streak in NBA history. Curry happens to own the record with a 157-game 3-point streak from Nov. 13, 2014 to Nov. 3, 2016. ... Green, who was limited in the morning shootaround due to a sore right knee, has 10-plus assists in six of his last seven games.

Cavaliers: Return to Cleveland to host San Antonio on Wednesday, the start of a four-game homestand.

Warriors: Host Miami on Wednesday in the fourth of a nine-game stretch against Eastern Conference opponents.