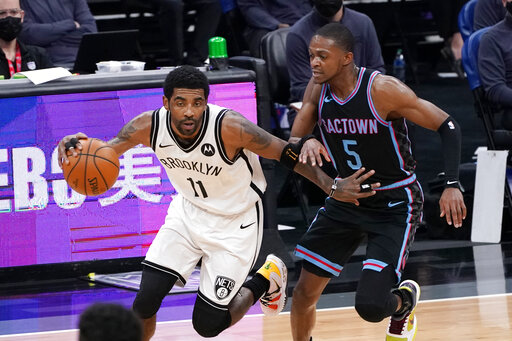 SACRAMENTO, Calif. (AP) - Kyrie Irving scored a season-high 40 points, James Harden had his fifth triple-double with Brooklyn and the Nets beat the Sacramento Kings 136-125 on Monday night as injured Kevin Durant watched from the bench.

Irving went 15 of 22 and made nine of the Nets' franchise-record 27 3-pointers, including consecutive shots from beyond the arc to start the game and three more as part of a 23-4 run in the third quarter.

Harden had 29 points, 14 assists and 13 rebounds, his ninth straight game with a double-double. The club record is 10.

Hassan Whiteside had 26 points and 16 rebounds for the Kings. De'Aaron Fox added 19 points and eight assists.

Brooklyn had seven players in double figures while Sacramento had six in a matchup between two of the NBA's three worst defenses.

The Nets were again without Durant, who sustained a mild left hamstring strain Saturday against the Warriors after returning from a week-long quarantine due to COVID-19 issues. Durant watched from the end of the bench.

It didn't matter much against the overmatched Kings.

Brooklyn scored 74 points in the first half, led by as many as 28 and shot 58% overall.

Nets: DeAndre Jordan was back in the lineup after sitting out Saturday's win at Golden State for personal reasons. Jordan finished with 10 points and eight boards. ... Brooklyn set a franchise record with its eighth game of 130 points or more. ... It was the seventh time in 20 games with the Nets that Irving scored 30 or more.

Kings: Marvin Bagley III had 19 points and seven rebounds after missing two games because of a sore left calf. ... Sacramento scored 22 points in the paint during the first quarter. ... Because of the back-to-back, Richaun Holmes was rested with a sore right knee. Cory Joseph started and scored a season-high 22 points.

Nets: Visit the Phoenix Suns on Tuesday. The teams split two games last season but this will be their only matchup this season.

Kings: Host the Heat on Thursday before leaving for a five-game road trip. Sacramento hasn't lost a home game to Miami since April 1, 2016.