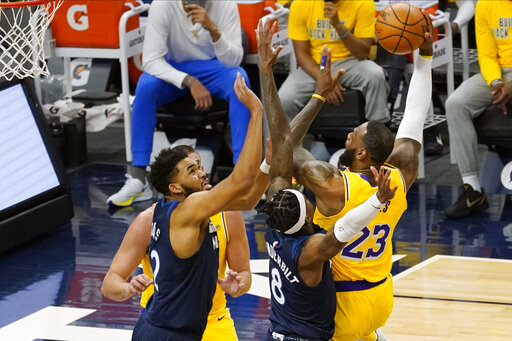 MINNEAPOLIS (AP) - LeBron James had 30 points, 13 rebounds and seven assists and Dennis Schroder scored 24 points, helping the Los Angeles Lakers pull away from the Minnesota Timberwolves for a 112-104 victory on Tuesday night.

Montrezl Harrell pitched in 17 points for the Lakers, who stopped a seven-game losing streak at Minnesota with its first win at Target Center since March 25, 2015.

Minnesota rookie Anthony Edwards had a career-high 28 points plus seven rebounds and five assists. Karl-Anthony Towns scored a quiet 15 points for the Timberwolves, who were outscored 17-5 to start the fourth quarter after a spirited effort over the first three periods.

Edwards, the first overall pick in the draft, hit his fourth and fifth 3-pointers of the game to cut the lead to 105-100 with 3:28 to go. Edwards was called for a charging foul on James, knocking the four-time league MVP over and negating a runner in the lane with 2:57 left, and the Timberwolves never got any closer.

The Lakers played the first of what will be several games in a row without seven-time All-Star Anthony Davis, who was shelved with an injury to his Achilles tendon. He aggravated it in a loss at Denver on Sunday that ended the Lakers' seven-game winning streak.

Though Davis has had his scoring load lessened a bit by the arrival of Schroder and Harrell, this stretch will be a test of the mettle of the reigning NBA champions as they continue to mostly get their opponents' best. The Lakers were far from sharp - James had four of his five turnovers in the first quarter - but plenty efficient on offense to emerge victorious.

Ricky Rubio and Jordan McLaughlin each scored 13 points for the Timberwolves, sharing time at point guard in the continued absence of D'Angelo Russell. Towns didn't even get a shot in the fourth quarter, with Edwards taking over.

The Lakers won the first meeting in Los Angeles by 36 points on Dec. 27, when Towns was out with a dislocated wrist. The absence of Davis from this one meant yet another missed matchup of two of the NBA's best big men - and first overall draft picks out of Kentucky, three years apart. The Lakers' visit to Minnesota last season was wiped out by the pandemic.

Lakers: Davis is unlikely to return before the All-Star break, coach Frank Vogel said. The cautious approach means Davis, whose official diagnosis is a right calf strain, would miss at least eight more games. This was his sixth absence in 29 games this season.

Timberwolves: Jarrett Culver, who missed his 12th consecutive game with a sprained left ankle, has been upgraded to on-court activity. The team said he could return to action late next week.

Lakers: Return to Los Angeles to face Brooklyn on Thursday. They will play six of next eight games going into the All-Star break at home.

Timberwolves: Host Indiana on Wednesday, finishing their sixth set of back-to-back games this season. They're 2-3 in the second half of those pairs.