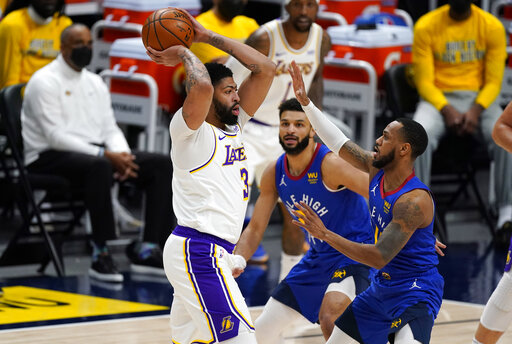 LOS ANGELES (AP) - Forward Anthony Davis' injured Achilles tendon is not ruptured, and he will be reevaluated when the Los Angeles Lakers return from their road trip.

The defending NBA champions made the announcement Monday after an MRI exam for Davis, who is out indefinitely.

The All-NBA first-teamer left the Lakers' game at Denver in the second quarter Sunday night with an apparent aggravation of the tendonosis that has bothered his right heel for at least two weeks. The seven-time All-Star had already missed five games this season with various minor injuries.

The Lakers (21-7) have nine games left before the All-Star break, starting Tuesday at Minnesota. Sitting in second place in the Western Conference, they are likely to be cautious with their superstar big man with an eye on keeping him healthy for the stretch run.

Davis' offensive production is down this season with the Lakers less reliant on him after the additions of Dennis Schroder, Montrezl Harrell and Marc Gasol.

The nine-year veteran is averaging 22.5 points - his lowest scoring average since his second NBA season - along with 8.4 rebounds and 1.8 blocks.

Davis was reinjured when he bumped into the leg of Nikola Jokic while driving to the hoop in Denver.

Davis sat out two games last week to rest his Achilles tendon, but returned with a 35-point game against Memphis last Friday.