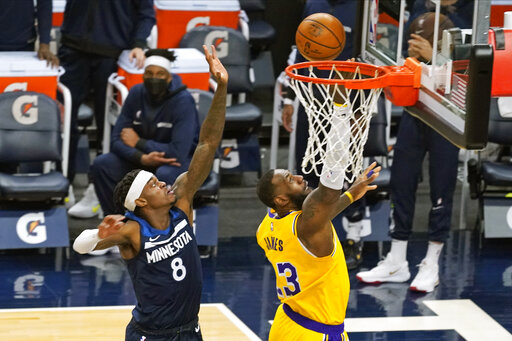 MINNEAPOLIS (AP) - LeBron James had 30 points, 13 rebounds and seven assists and Dennis Schroder scored 24 points, helping the Los Angeles Lakers pull away from the Minnesota Timberwolves for a 112-104 victory on Tuesday night.

Montrezl Harrell pitched in 17 points for the Lakers, who stopped a seven-game losing streak at Minnesota with their first win at Target Center since March 25, 2015.

Minnesota rookie Anthony Edwards had a career-high 28 points plus seven rebounds and five assists. Karl-Anthony Towns scored a quiet 15 points for the Timberwolves, who were outscored 17-5 to start the fourth quarter after a spirited effort over the first three periods.

Edwards, the first overall pick in the draft, hit his fourth and fifth 3-pointers of the game to cut the lead to 105-100 with 3:28 to go. Edwards was called for a charging foul on James, knocking the four-time league MVP over and negating a runner in the lane with 2:57 left, and the Timberwolves never got any closer.

The Lakers played the first of what will be several games in a row without seven-time All-Star Anthony Davis, who was shelved with an injury to his Achilles tendon. He aggravated it in a loss at Denver on Sunday that ended the Lakers' seven-game winning streak.

MEMPHS, Tenn. (AP) - Zion Williamson scored 31 points while dominating inside, and New Orleans ended a three-game skid with a victory over Memphis.

Williamson, who was 13 of 16 from the field, added seven rebounds and six assists as the Pelicans finished with a season high in points. Josh Hart scored a season-high 27 points and Brandon Ingram had 22 for New Orleans.

Ja Morant scored 28 points on 12-of-16 shooting for Memphis. Kyle Anderson finished with 19 points and Dillon Brooks scored 18, going 4 of 6 from 3-point range.

The Pelicans won their fifth straight over the Grizzlies in the latest showdown between Williamson, the top overall pick in the 2019 draft, and Morant, who was taken second.

Lowry exited with a sore left ankle in the third quarter but had 18 points, six rebounds and six assists in 22 minutes. The ankle problem caused Lowry to go to the locker room late in the first half, though he returned to start the third quarter.

Milwaukee lost its fourth straight despite getting 34 points, 10 rebounds and eight assists from Giannis Antetokounmpo. The Bucks hadn't dropped four in a row since the 2019 Eastern Conference finals against Toronto, when they blew a 2-0 lead and lost the series in six games.

It was Jokic's third 40-point game of the season. Jamal Murray added 25 points but Denver had its three-game winning streak snapped.

The Trail Blazers squandered a 24-point lead in the second half, then regained control behind Lillard, who made all four of his 3-point tries during the closing run while playing with five fouls.

Gary Trent Jr. scored 19 points and Enes Kanter had eight points and 21 rebounds for Portland, which has won five straight. Lillard is averaging 30.2 points during the streak.