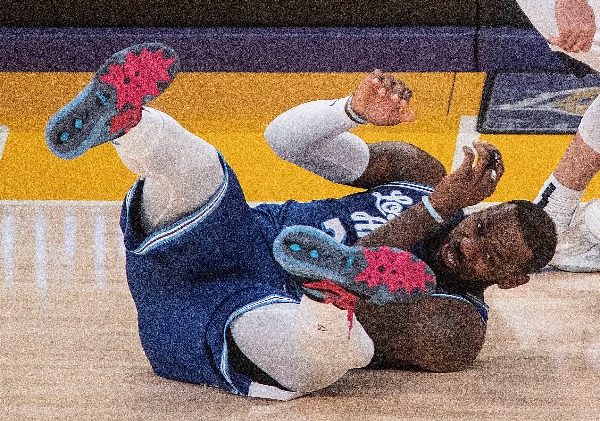 The Los Angeles Lakers announced Saturday that LeBron James will miss extended time due to a high ankle sprain. The news broke following the Lakers’ 99-94 loss to the Atlanta Hawks at the Staples Center.

James had to leave the game in the first half after Solomon Hill collided with James’ right ankle. Following the game, James underwent x-rays and an MRI. Hill was hit with a foul after colliding with James when he attempted to steal the ball. The injury occurred with 10:50 left in the second quarter.

James immediately hit the floor, writhing in pain and screaming.

"I haven't necessarily seen him scream and scowl like that probably ever," teammate Kyle Kuzma said.

Quite a few Lakers players took exception with how the play occurred, calling Hill out for his actions.

"A guy dove for a loose ball, took his leg out from up under him," Montrezl Harrell said. "I really don't feel like it was one of those loose-ball plays. He had to go through his leg to get the ball, man. He was turned sideways. The ball was behind him. I mean, you're jumping at an angle, going across this way, I mean, I don't know how you feel that's a loose ball."

Hill heard the criticism of his actions and tweeted the following after the game:

“Would never disrespect the game and take a player out purposely... he knows that. that’s all that matters to me. praying for a speedy recovery.”

James was able to walk back to the Lakers bench under his own power, although visibly limping. He laced up his shoes and stayed in the game after the Lakers took a timeout to evaluate him.

On the team’s first possession following the timeout, James nailed a three-pointer, upping his stat line to 10 points on 3-for-6 shooting. It extended his streak to 1,036 straight games with 10 or more points scored.

With 10:04 left in the second quarter, the Lakers called a timeout to remove James from the game. Los Angeles was trailing 34-30 at the time.

James tweeted the following after the game:

“Nothing angers and saddens me more than not being available to and for my teammates! I’m hurt inside and out right now. The road back from recovery begins now. Back soon like I never left.”

Entering Saturday’s game, James was averaging 25.8 points per game, 8.1 rebounds per game, and 8.0 assists per game. He had missed just one game this season prior to leaving early Saturday.

Los Angeles, the defending league champions, have already been shorthanded. Anthony Davis has been out of the lineup for the last 14 games due to a calf strain and tendinosis in his right leg. On top of that, Marc Gasol has missed the last seven games due to the league’s health and safety protocols.

Despite all of this, head coach Frank Vogel said, "We have enough offensive firepower and we have a defensive mentality with our group so to me, we have enough to win."

With the Lakers now without James, Davis, and Gasol for the foreseeable future, it looks as though the Lakers’ odds to win the Western Conference will take a big hit.