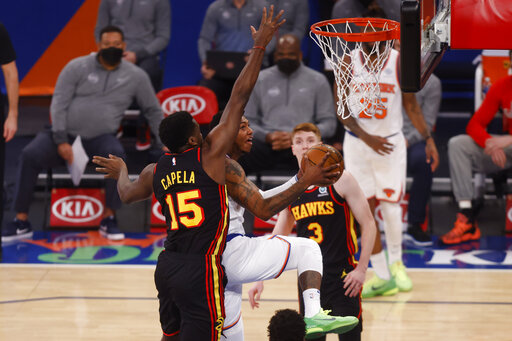 Randle added nine rebounds and five assists in perhaps the best performance of a season that should merit All-Star consideration. The seventh-year forward scored 17 points on 7-for-8 shooting in the first quarter to send the Knicks to a fast start and ended up one point shy of his career high.

RJ Barrett added 21 points and rookie Immanuel Quickley had 16 for the Knicks, who improved to 14-15 and can reach .500 with a victory over Orlando on Wednesday. They have doubled their win total through 29 games from last season, when they were 7-22.

Trae Young had 23 points and eight assists for the Hawks, who dropped their fourth straight and seventh in the last eight games.

The Hawks had yielded 118, 125 and 125 points during their skid coming in and had plenty more trouble defensively with a Knicks team that scored 20 more than its NBA-low 103.3 points per game. New York tied its season best with 66 points in the first half.

The Knicks raced to a 16-5 lead in the first four minutes and were still up 11 after one quarter. Quickley's 3-pointer to open the second made it 42-28, New York's largest lead of the half, but Atlanta knocked it down to 66-63 by halftime.

Atlanta scored the first nine points of the third for a 72-66 lead after John Collins' dunk, but couldn't control Randle - the only Knicks player to score for nearly half the quarter. New York surged ahead again with a 15-2 spurt that turned a seven-point deficit into a six-point lead, and another 3 by Randle made it 93-86 with just over a minute remaining in the period.

Hawks: Collins had 19 points. Cam Reddish and Danilo Gallinari each scored 16. ... Clint Capela, the NBA's leading rebounder, had 15 points and 18 boards. He has been in double figures in rebounds in 22 of 24 games this season.

Knicks: Coach Tom Thibodeau said center Mitchell Robinson will have another consultation with a surgeon on his broken right hand Tuesday and afterward would have a better update on how much time he could miss. ... Frank Ntilikina missed his fourth straight game because of health and safety protocols. Thibodeau said Ntilikina continues to test negative for the coronavirus.

Thibodeau has always had a reputation as a no-nonsense workaholic, but Hawks coach Lloyd Pierce described a much different personality at the Las Vegas Summer League or NBA coaches' meetings.

"About as nice a person as you'll meet," Pierce said. "He's always got a smile on his face. He's easy to talk to. Different personality come game time."

Thibodeau smiled when told that Derrick Rose, playing for him for the third time, said he's never seen the coach smile as much as he has now.

"Look, I want us to work," Thibodeau said. "I think when you get a team that's committed to playing for each other and doing the right things, I also want us to enjoy it."

Hawks: Visit the Boston Celtics for games on Wednesday and Friday.