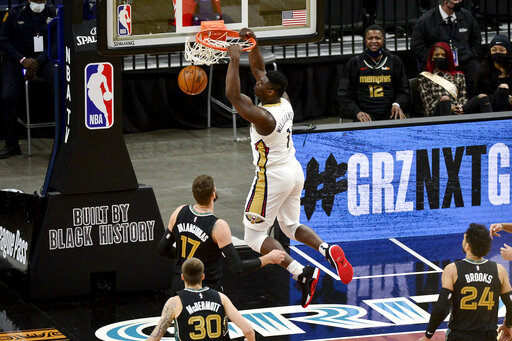 MEMPHIS, Tenn. (AP) - When Zion Williamson mixes up his game, the New Orleans Pelicans can be tough to stop.

Williamson scored 31 points while dominating inside, and the Pelicans finished with a season high in points while ending a three-game skid with a 144-113 victory over the Memphis Grizzlies on Tuesday night.

"I'm always on the move, so the defense has to not only adjust to me trying to get to a spot, but they also have to adjust to me making a move," Williamson said. "I feel like I pull the defense in so I can find my teammates a lot easier."

Williamson, who was 13 of 16 from the field, added seven rebounds and six assists.

"He's just tough. There's only so much you can do," New Orleans coach Stan Van Gundy said, adding that the team has improved in the past month and "a lot of that is because of the efficiency of Brandon (Ingram) and Zion and their willingness to pass and set people up."

"We keep trying to find more and more ways to use (Williamson)," Van Gundy said.

Ja Morant, who was picked second in the 2019 draft behind Williamson, scored 28 points on 12-of-16 shooting for Memphis. Kyle Anderson finished with 19 points and Dillon Brooks scored 18, going 4 of 6 from 3-point range.

The Pelicans, who won their fifth straight over the Grizzlies, pulled away in the third quarter, outscoring Memphis 38-23 to take a 101-81 lead into the fourth.

Memphis never threatened in the final frame as the Pelicans' lead eventually stretched to 34 points.

"We just kept getting stop after stop after stop," Hart said. "We were getting out in transition, play fast and knock down shots. That lead started to balloon. Fourth quarter, we did the same thing."

Pelicans: Wrapped up a four-game trip with a 1-3 record. ... Are 16-0 against the Grizzlies when scoring at least 110 points. ... JJ Redick missed his first free throw of the season late in the third quarter, ending a string of 33 straight. ... Either Williamson or Ingram has led Pelicans in scoring all but one game this season. Nickeil Alexander-Walker, the second-year pro from Virginia Tech, scored 37 against the Clippers on Jan. 13.

The Grizzlies were without guard De'Anthony Melton (sore left shoulder). Jenkins said Melton is day-to-day. Meanwhile, Jenkins said Justise Winslow and Jaren Jackson Jr. are getting closer to returning. Neither has played this season.