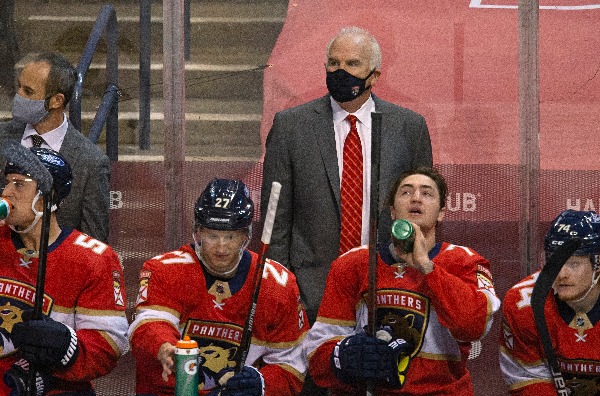 A host of NHL teams are not only dealing with COVID-19 but also injuries unrelated to the pandemic. The Boston Bruins, Toronto Maple Leafs, Columbus Blue Jackets, and Florida Panthers have all been hit especially hard by the injury bug and COVID-19 protocols of late. Here are updates for all four teams as you prepare to place bets on any games they might or might not play this coming week.

The Boston Bruins are dealing with multiple players being placed in the league COVID protocols. The latest player to miss time is Brad Marchand. He was added prior to today’s game against the Buffalo Sabres, which resulted in a 3-2 win for the Bruins. It was the first game Marchand missed this season.

"We have a deep roster. Other guys are ready to go," Boston head coach Bruce Cassidy said before the game. Every player in that room probably wants more responsibility. So here's a day where they're going to get some of that, whether it's Frederic on that line or someone's in 'Marshy's' power-play spot or on the penalty kill. So opportunity is knocking for other players and it's up to them to seize it. Not try to be 'Marsh,' but be themselves and the best version of themselves."

Sean Kuraly and Jale DeBrusk are also in the protocols. Prior to those players being added, David Pastrnak, Craig Smith, and David Krejci all went into the protocol. This led to the Bruins having two games suspended against the Sabres and New York Islanders.

Toronto Maple Leafs Without Their Goalie

Head coach Sheldon Keefe said today that goalie Frederik Andersen might not be close to returning to the lineup.

"No real update yet, one should be coming," Keefe said. "He's had some different examinations and different things he's had looked at. He's not been on the ice, so his return is not imminent here, but I expect we will have an update on that in the coming days."

The Maple Leafs had Jack Campbell in the net for a third straight game on Saturday, which resulted in a win in overtime 4-3 against the Edmonton Oilers. Michael Hutchinson has been serving as the backup goalie with Andersen out.

Columbus goalie Joonas Korpisalo has been day-to-day while nursing a lower-body injury. He last played on Thursday night, a 4-3 loss in overtime to the Carolina Hurricanes. He allowed the four goals on 33 shots. In his place, Elvis Merzlikins started in the net Saturday. It resulted in a 3-1 loss against the Detroit Red Wings.

The Panthers are without two of their top three scorers in Patric Hornqvist and Aleksander Barkov after they missed the game against the Dallas Stars today. Hornqvist is expected to be out at least a week with an unknown injury. Barkov will miss a third straight game on Sunday due to a lower-body injury.

"Irreplaceable players, no doubt about it," defenseman Aaron Ekblad said. "But we're going to go out there and do our best to fill their roles and find a way to win this game. That's what it comes down to. Obviously losing three straight we want to find a way out of this, and it's going to take a full team effort to do it."