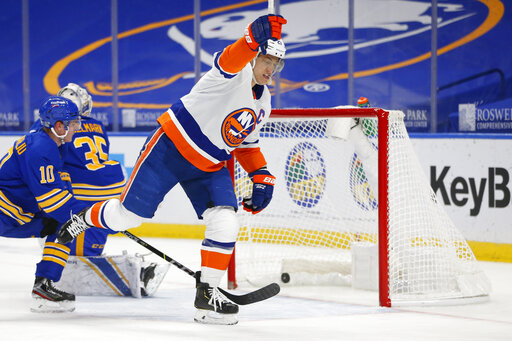 BUFFALO, N.Y. (AP) - Semyon Varlamov stopped 20 shots and the New York Islanders extended their point streak to seven games with a 3-1 win over the COVID-19-depleted Buffalo Sabres, who were playing their first game in two weeks on Monday night.

Buffalo still had six regulars sidelined, including three defensemen, in returning after a coronavirus-forced break, which began two days after a 5-3 loss to New Jersey on Jan. 31. Rust and fatigue played a factor in a game in which the Sabres failed to get a shot on goal in the third period (12-0) and were outshot 29-21 overall.

Anders Lee and and Jean-Gabriel Pageau scored first-period goals 1:44 apart, and Brock Nelson scored on the power play for the Islanders, who are on a 4-0-3 run.

Victor Olofsson scored a power-play goal for Buffalo to extend his point streak to a career-best seven straight games. He has three goals and five assists in the stretch.

Linus Ullmark stopped 26 shots for Buffalo, which had six games postponed and resumed practicing on Wednesday. The Sabres eventually had nine players land on the NHL's COVID list, plus coach Ralph Krueger, who tested positive and said he experienced "moderately severe symptoms." The 61-year-old returned to practice Sunday and was cleared to take his spot behind the bench on Monday.

The outcome was decided in the second period with the teams trading power-play goals.

Olofsson cut New York's lead to 2-1 by one-timing in Rasmus Dahlin's no-look pass into the right circle 1:40 into the period. The Isles responded 10 minutes later with Nelson left alone at the left post, where he redirected in Josh Bailey's pass from atop the right circle.

Varlamov provided the slow-starting Islanders a jolt with an instinctive save off Olofsson's one-timer from the lower right circle with five minutes left in the first period and Buffalo holding an 11-6 edge in shots. Olofsson was set up alone by Jack Eichel's feed, and got off a hard shot only to have Varlamov kick out his left pad and get enough of the puck to have it bounce off the near post.

The Islanders then closed the period with two goals. Lee opened the scoring with 3:23 left in the period by redirecting Bailey's low hard pass over Ullmark's near shoulder. Mathew Barzal extended his career-best point streak to nine straight games (four goals, seven assists) by checking Sam Reinhart off the puck and feeding Bailey.

Pageau scored with 1:39 left by streaking up the right wing, getting a step on Dahlin and snapping a shot over Ullmark's glove from a tight angle.

Sabres: Minor-league callups Ds William Borgen and Brandon Davidson, and forward Steven Fogarty made their season debuts. Ds Jake McCabe and Brandon Montour participated in the pregame skate in an indication they are ready to be removed from the COVID-19 list after both said they tested positive.

The Sabres will be required to squeeze in their final 46 games over an 83-day stretch, which is scheduled to end on May 8. Buffalo is also opening a period of playing 16 games in 27 days before getting its next two-day layoff. The Sabres have just four multi-day breaks left on their schedule, including one three-day stretch spanning April 19-21.

"You might've watched your last practice until May," coach Krueger said with a laugh on Sunday.

Starting Monday, the Sabres and Islanders will square off six times through March 7.

The Sabres were supposed to travel to play the Islanders on Feb. 2 before their season was paused.

Teams complete a two-game series in Buffalo on Tuesday night.