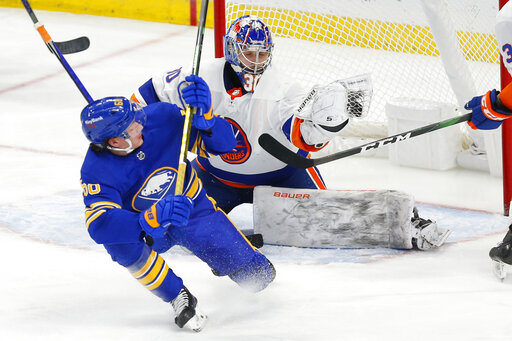 Jean-Gabriel Pageau and captain Anders Lee scored in a 7:15 span in the first period, and the Islanders improved to 5-0-3 in their past eight - the team's longest streak since a 15-0-2 franchise-record run in the opening two months of the 2019-20 season. Lee added an empty-net goal in the final second, and Pageau extended his scoring streak to four games, in which he has five goals.

The Sabres dropped to 1-3-1 in their past five and lost three in a row, with goalie Carter Hutton stopping 21 shots.

Pittsburgh won its first five games at home, including three against the Capitals. Zach Aston-Reese set a career high with his third goal in as many games, and Tristan Jarry made 39 saves for the Penguins.

Pavel Zacha, Will Butcher and Mikhail Maltsev also scored for New Jersey, which returned to action for the first time since Jan. 31 after a pause due to a COVID-19 outbreak. Mackenzie Blackwood made 37 saves and Janne Kuokkanen added three assists in the win.