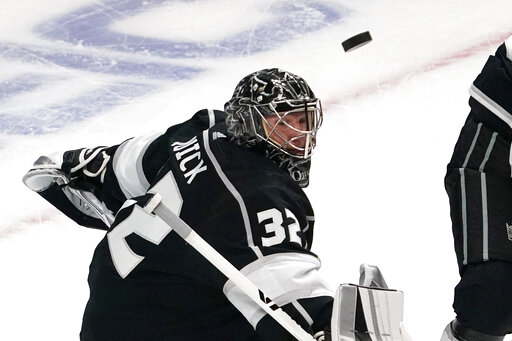 LOS ANGELES (AP) - Jaret Anderson-Dolan had a goal and an assist, Jonathan Quick made 28 saves and the Los Angeles Kings defeated the Minnesota Wild 4-0 on Tuesday night.

It was Minnesota's first game since Feb. 2 due to a COVID-19 outbreak.

Trevor Moore, Dustin Brown and Drew Doughty also scored for the Kings, who have earned at least one point in four of five games against the Wild this season.

Kaapo Kahkonen made 25 saves for Minnesota.

The Wild, who had as many as 13 players in the COVID-19 protocol during the two-week span between games, looked a step slow at the start. Nick Bjugstad hooked Kings defenseman Austin Strand in the offensive zone inside the opening two minutes. That led to Anderson-Dolan putting Los Angeles ahead 1-0 on wrist shot from the left circle at 3:36.

The Kings overwhelming controlled play in the first period, with Drew Doughty hitting the post as part of a 9-3 advantage in shots. Even routine plays seemed unfamiliar to the Wild after so much time off, best exemplified by Minnesota rookie forward Kirill Kaprizov losing his footing and ending up sliding on his knees to scuttle a promising rush.

Minnesota got into the game in the second period, drawing two early penalties and forcing Quick into some difficult saves. But the Kings went up 2-0 on Moore's first goal at 12:03. Anderson-Dolan led the break before finding Moore in the slot for a one-timer.

It was Anderson-Dolan's second straight game with a goal and an assist. He has five points in his last three games.

Brown made it 3-0 at 16:56 of the third period, netting his seventh goal off a crisp pass from Anze Kopitar. Doughty added an empty-netter at 19:23.

Addressing special teams was one of the tasks Kings coach Todd McLellan was given when hired in April 2019, and he is starting to see results. Los Angeles has five power-play goals in its last three games, and they have scored with the man-advantage in nine of 14 games this season.

The penalty kill has also gotten back on track after a few poor seasons, something Minnesota knows all too well. The Wild has not scored on any of its 21 power plays against the Kings.

Kings defenseman Matt Roy played for the first time since sustaining a concussion when he was checked into the boards from behind by Wild forward Kevin Fiala on Jan. 28.

In a coincidence created by Minnesota's COVID-19 pause, Fiala returned from the three-game suspension he received for the hit on Roy against the Kings.

Wild: Minnesota starts a two-game set at the Anaheim Ducks on Thursday.

Kings: Los Angeles will begin a six-game trip when it faces the Arizona Coyotes on Thursday.