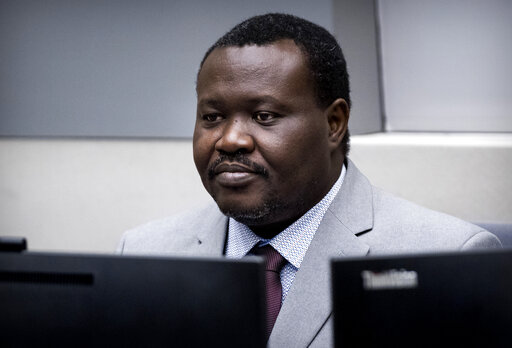 THE HAGUE, Netherlands (AP) - The former head of the Central African Republic's soccer federation and an alleged rebel commander known as Rambo are going on trial Tuesday at the International Criminal Court, charged with war crimes and crimes against humanity.

Former soccer official Patrice-Edouard Ngaďssona and Alfred Yekatom are accused of involvement in atrocities including murder, torture and attacking civilians. The charges stem from their roles as senior leaders in a predominantly Christian militia known as the anti-Balaka that engaged in bitter fighting with the mainly Muslim Seleka rebel group in 2013 and 2014.

The interreligious violence left thousands dead and displaced hundreds of thousands. Mosques, shops and homes were looted and destroyed.

Tuesday's trial is the first at the global court that focuses on the violence that erupted after the Seleka seized power in the Central African Republic in 2013, forcing President Francois Bozize into exile.

The process begins against a backdrop of ongoing violence in the African nation despite a two-year-old peace deal. Fighting erupted again after the constitutional court rejected Bozize's candidacy for December's presidential election. A coalition of the six strongest militias backing Bozize seeks to overturn results of the election in which Faustin-Archange Touadera won a second term.

The mineral-rich nation faces an increasingly dire humanitarian crisis, with some 200,000 people fleeing their homes in less than two months, according to the United Nations.

"A justice void has fueled repeated violence in the Central African Republic, with a new wave of attacks in just the past two months. Fair, credible trials of atrocities are key for the country to break these cycles," said Elise Keppler, associate international justice director at Human Rights Watch.

Ngaďssona was president of the country's soccer body for more than a decade from 2008. The sport's international governing body, FIFA, banned him from the sport for six years and eight months in November 2019 following his arrest and publication of allegations against him.

According to prosecutors, Ngaissona was an influential leader of the anti-Balaka group and Yekatom a military leader who commanded thousands of fighters drawn from among local self-defense groups.

Yekatom was surrendered to the ICC in November 2018 after being arrested for firing a gun in parliament. Ngaďssona was detained a month later in France.

The Central African Republic government asked the ICC in May 2014 to investigate crimes allegedly committed by both the Seleka and the anti-Balaka. Last month, the first alleged Seleka rebel arrested on an ICC warrant was handed to the court.