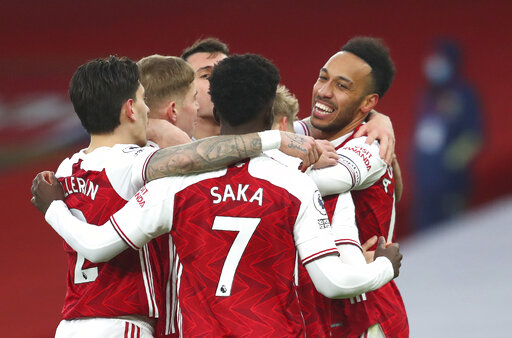 Aubameyang put the hosts in front in the 13th minute at Emirates Stadium, teasing Leeds right back Luke Ayling with a series of stepovers before skipping past him. The forward then squeezed a shot between Ayling and Liam Cooper to beat the goalkeeper at the near post.

Aubameyang's penalty in the 41st minute gave Arsenal a second, and right back Hector Bellerin scored the team's third goal just before halftime after good buildup play. Aubameyang rounded out his hat trick when midfielder Emile Smith Rowe's cross set up his captain to head home in the 47th.

But Leeds came back into the game in the second half, with manager Marcelo Bielsa making a double substitution. Pascal Struijk scored with a towering header from a corner to beat goalkeeper Bernd Leno in the 58th. The visitors got a second in the 69th when Helder Costa slotted past Leno after being set up by fellow substitute Tyler Roberts.

Arsenal moved up a place into 10th with 34 points, while Leeds dropped down a spot to 11th with 32 points.