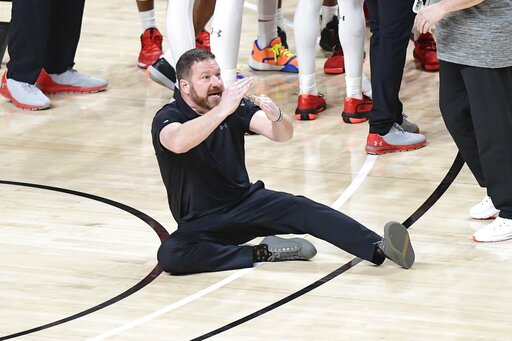 IRVING, Texas (AP) - The Big 12 Conference on Monday altered three games on its schedule this week because of extreme winter weather in the southern Great Plains region that created travel issues, including one game that had already reset.

The league said TCU's game at No. 15 Texas Tech would not be played Tuesday night. That came less than 24 hours after the dates had already been switched and the home sites flip-flopped for the scheduled back-to-back games between the Horned Frogs and Red Raiders.

No. 12 Texas will now play at No. 9 Oklahoma on Wednesday night after that game was pushed back from its scheduled Tuesday slot. The league also postponed the Longhorns' game at Iowa State that was scheduled Thursday night.

Texas Tech was scheduled to play Monday night at TCU, which was to be the makeup of a Jan. 20 game postponed because of COVID-19 issues within the Frogs' program. Those two teams were then scheduled to play Wednesday in Lubbock, which was part of the original schedule for both teams.

The Big 12 altered both of those games on Sunday, when Texas Tech was unable to travel to Fort Worth. The league said then that the Red Raiders and Horned Frogs would play Tuesday in Lubbock and then again Thursday in Fort Worth. That Thursday night game is still currently scheduled.

Oklahoma has won five games against Top 25 teams this season, including a double-overtime win at No. 13 West Virginia on Saturday.