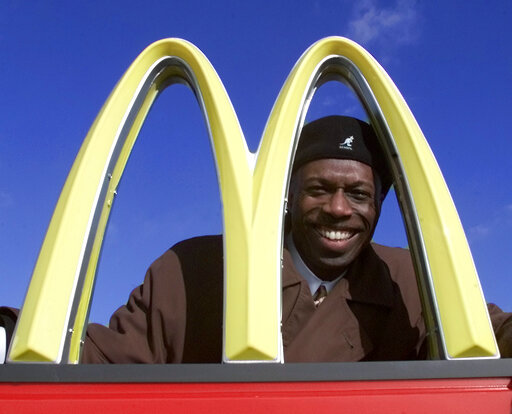 CLEVELAND (AP) - The Black owner of 14 McDonald's franchises says the company has shown more favorable treatment to white owners and denied him the opportunity to buy restaurants in more affluent communities, according to a civil rights lawsuit filed Tuesday in federal court in Youngstown.

The lawsuit filed by Herbert Washington, a former Michigan State track star who played for parts of two seasons with the Oakland Athletics in the mid-1970s, said the Chicago-based company's discriminatory practices has led to a $700,000 sales gap between Black-owned franchises and those owned by white people.

Franchises in low-income neighborhoods cost more to operate, have higher employee turnover and are not as profitable, the lawsuit said.

More than 50 former Black McDonald's franchise owners made similar claims to Washington's in a lawsuit filed against the company in September, saying they were forced to sell around 200 stores in the last decade.

During a video news conference on Tuesday, Washington said he had been fighting a two-tiered system since he bought his first franchise in Rochester, New York, 40 years ago. Washington at one point owned 27 restaurants and said he was forced by McDonald's to sell seven stores over the last several years to white owners.

He now owns 12 restaurants in northeast Ohio and two in Pennsylvania. He blames his advocacy on behalf of Black McDonald's owners for his troubles with the company.

"McDonald's has targeted me for extinction," Washington said. "The arches are in full-scale retaliation mode against me."

McDonald's issued a statement on Tuesday denying Washington's assertions. The company said Washington is "facing business challenges" for which the company has "invested significantly in his organization" while offering him "multiple opportunities over several years to address these issues."

"This situation is the result of years of mismanagement by Mr. Washington, whose organization has failed to meet many of our standards on people, operations, guest satisfaction and reinvestment," the statement said.

According to the lawsuit, the number of Black McDonald's franchise owners in the U.S. has fallen from 377 in 1998 to 186 today. The company said in response that while the total number of its U.S. restaurants has risen from around 12,500 at the end of 1998 to 14,000 today, the percentage of stores owned by blacks "is broadly unchanged."

Washington said he always hoped that McDonald's would change its culture and create parity between Black and white franchise owners. He said the company recently offered him $6 a day for each of his franchises to help close the sales gap.

"I can't even buy a Happy Meal with that kind of help," he said. "They don't want a guy like me around. I'm telling the truth."

The 69-year-old Washington holds a unique place in baseball history. An NCAA champion and All-American sprinter, he was used purely as a pinch-runner in the major leagues -- he got into 105 games for the Oakland Athletics in 1974-75, yet never came to bat and never got on the field with a glove.

Washington stole 31 bases and scored 33 runs for the A's. He earned a championship ring after getting into three World Series games for the Athletics in their win over the Los Angeles Dodgers in 1974.

Washington was working as a sportscaster in Lansing, Michigan, near the Michigan State campus, when innovative A's owner Charlie O. Finley called him with an offer to play baseball.

Many around the majors considered it a joke, but Washington's speed added another dimension to a team that won three straight World Series championships. Washington spent the entire 1974 season with Oakland and was let go in May 1975.