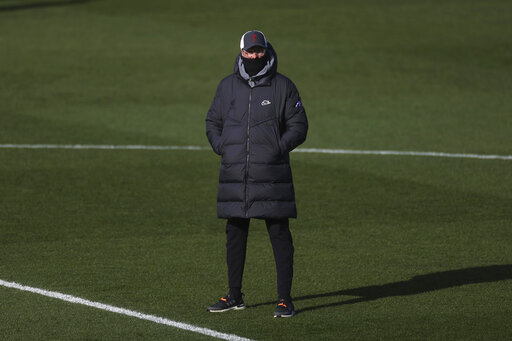 LIVERPOOL, England (AP) - Liverpool manager Jurgen Klopp insisted Monday he is ready for the challenge of turning his team around after a tough period both on and off the field.

Klopp conceded that his team would not be retaining the Premier League after a 3-1 loss to Leicester on Saturday, which left Liverpool on a run of only two wins in 10 matches and 13 points behind first-place Manchester City.

It also has been a difficult time for Klopp personally with his mother, Elisabeth, dying last month at the age of 81 after contracting COVID-19. Klopp was unable to attend the funeral because of travel restrictions.

Speaking ahead of the first leg of Liverpool's last-16 match against Leipzig in Budapest in the Champions League, Klopp said he was not in need of any "special support."

"I can split things, I can switch off, one thing and the other thing, I don't carry things around," he added. "Of course we are influenced by things that happen around but nobody has to worry about me or whatever. I might not look (fine), because the weather is not cool, the beard gets more and more gray, I don't sleep a lot, my eyes look like this, but I am full of energy."

Addressing Liverpool's poor form, which has seen the team lose three straight league games for the first time since he joined in 2015, Klopp said it was an "interesting challenge."