Marlins will allow fans, with capacity at about 25 percent 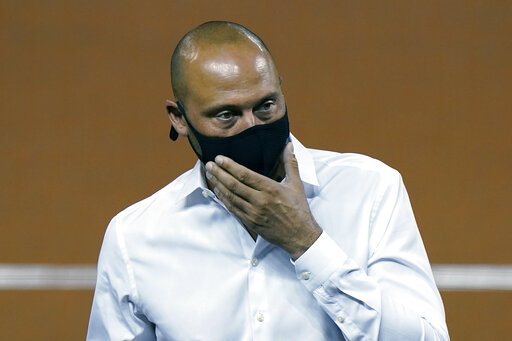 MIAMI (AP) - Small crowds at Marlins Park will be back this season.

The attendance-challenged Marlins plan to allow fans at home games, although crowds will initially be limited to about 25% of capacity. That would mean a maximum of about 9,300 spectators in the 37,446-seat ballpark.

"We look forward to having the opportunity to have fans come back to our ballpark," CEO Derek Jeter said Monday. "There will be a limited number of fans that are allowed at the onset. We hope those numbers increase throughout course of the season, but the most important thing for us is to make sure everyone is healthy and safe."

The Marlins, like the rest of MLB, didn't allow fans during the 2020 regular season because of the coronavirus pandemic. Limited crowds were permitted for the postseason, and that will be the case for spring training games in Florida and Arizona starting late this month.

The Marlins averaged about 10,000 fans in 2018 and 2019, the first two seasons that Jeter's group owned the team. They finished last in the majors in attendance both years, and ranked last in the National League 14 out of 15 seasons through 2019.

The 2020 season might have brought an increase as the Marlins made surprising run to their first playoff berth in 17 years. But because of COVID-19, the size of the bandwagon was impossible to gauge.

"One thing that was a little bit disappointing last year - going through the pandemic, you hear about the excitement of our fan base, but they weren't able to come to games," Jeter said. "I would have loved to have seen what that looked like.

"There is a level of excitement, and we need to continue to build on that, not only on the baseball side but on the business side as well."

The Marlins anticipate increased revenue this year not only at the box office, but thanks to a pending rights agreement that is expected to more than double income from local game telecasts.

"We will no longer have the worst deal in major league baseball," majority owner Bruce Sherman said.

Pitchers and catchers report Wednesday to spring training in Jupiter, Florida, and like every team at this time of year, the Marlins are optimistic. Their young, promising rotation provides a strong foundation, and the minor league system is much improved since Jeter's group bought the franchise in late 2017.

The Marlins are low on star power, but Jeter - a former Yankees captain who will be inducted into the Hall of Fame this summer - knows how quickly that can change.

"Every star wasn't always a star," he said. "I can go off experience. When our group was younger, nobody knew who we were. After a couple of years and a little bit of success, you become a household name.

"Last year was a good first step for us, getting to the postseason. That's how you become a star -- having personal success, but even more so having team success."

Still in doubt is how well Miami will support baseball even if the team consistently wins. The pandemic interrupted the Jeter group's efforts to build a bigger following.

"We wouldn't have put together an ownership group and purchased the organization if we didn't feel as though Miami was a baseball town, and that fans ultimately would come out and support the team," Jeter said. "I wish we would average 37,000 fans this year, but we understand it's going to take some time."