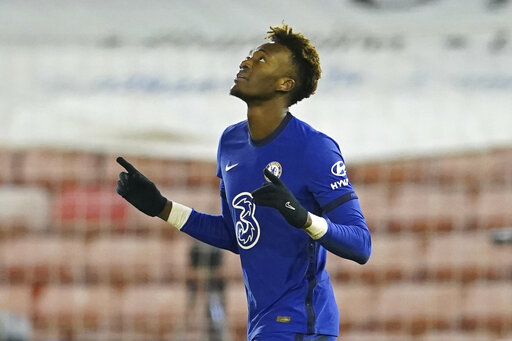 A look at what's happening in European soccer on Monday:

Chelsea hosts Newcastle with the opportunity to move back into the Premier League's top four after defending champion Liverpool's 3-1 loss at Leicester. Following a run of nine games without a win, Newcastle has won two of its last three league matches. But Callum Wilson is now facing an eight-week layoff after tearing a hamstring during last weekend's 3-2 victory over Southampton. West Ham is only behind Chelsea on goal difference in sixth place heading into a home game against last-place Sheffield United. West Ham is one of the surprise packages of the season after finishing just five points above the relegation zone in the previous campaign with 39 points from 38 games. David Moyes' side has already matched that points tally to sit just outside the Champions League places.

Cadiz hosts Athletic Bilbao looking to end a five-match winless streak and move further away from the relegation zone in the Spanish league. The club from southern Spain is sitting 15th in the 20-team standings, three points from safety. Athletic is in 11th place. It got off to a great start to the year under new coach Marcelino Garcia Toral, beating Real Madrid and Barcelona to win the Spanish Super Cup, but it hasn't won in four straight matches in all competitions.

Relegation-threatened Parma hasn't won since coach Roberto D'Aversa returned to the club last month. It visits Hellas Verona on Monday. Parma has lost five matches in all competitions under D'Aversa, drawing the other. It is second from bottom in the Serie A standings, four points from safety. Verona has lost three of its last four league matches to slip to ninth in the standings, 10 points off a European spot it looked to be chasing earlier in the season.

Bayern Munich resumes its Bundesliga title defense with a home game against Arminia Bielefeld following its return from Qatar, where it won the Club World Cup. Bayern coach Hansi Flick hit back at criticism from "so-called experts" over the trip to Qatar amid coronavirus restrictions at home. Forward Thomas Muller missed the final after testing positive for COVID-19. Midfielders Leon Goretzka and Javi Martinez recently also returned positive results. Goretzka remains unavailable with a calf injury, Serge Gnabry tore a thigh muscle during the final and Jerôme Boateng has been granted time off for private reasons. Bielefeld is bidding to leave the relegation zone.