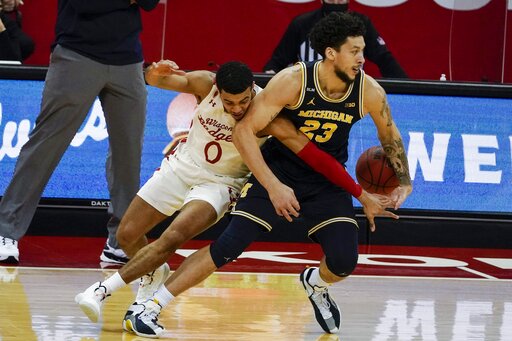 Third-ranked Michigan and fourth-ranked Ohio State have found themselves atop the crowd of teams chasing unbeatens Gonzaga and Baylor.

Their meeting Sunday headlines the national AP Top 25 schedule for the week, a matchup of teams contending for No. 1 seeds in the NCAA Tournament and more.

Michigan (14-1, 9-1 Big Ten) returned Sunday from an extended pause due to coronavirus concerns with a comeback road win at No. 21 Wisconsin. Meanwhile Ohio State (17-4, 11-4) has won six straight overall - including against the Badgers and No. 11 Iowa.

Both teams were top seeds in Saturday's initial rankings from the committee that will select the field of 68 teams for the NCAA Tournament. They boast two of the nation's most efficient offenses.

The Buckeyes are fourth in KenPom's adjusted offensive efficiency by averaging 122.6 points per 100 possessions.

"The biggest thing as a coach right now is we've got to get better," Ohio State coach Chris Holtmann said after Saturday's win against Indiana. "And the moment that any type of complacency comes in and we see it in practice, it needs to be addressed. ... And we've got to stay fully engaged as a group, from scout team on down."

"We trust (coach Juwan) Howard, we trust the whole coaching staff," Wolverines forward Isaiah Livers said afterward. "We trust each other most importantly."

The Big 12 had a national-best six teams in Monday's latest AP Top 25 poll, and that has set up multiple matchups between ranked teams this week. It figures to be a particularly challenging week for No. 12 Texas.

The Longhorns have games against two teams that appeared in the NCAA Division I Men's Basketball Committee's top 16 seeds, first by visiting No. 9 Oklahoma on Wednesday and then hosting No. 13 West Virginia on Saturday.

The week also includes Saturday's matchup between No. 15 Texas Tech and No. 23 Kansas - which fell out of last week's poll for the first time in 12 years but popped back in Monday. And second-ranked Baylor is scheduled to return to action Saturday against Oklahoma State in the Bears' first game since Feb. 2 after having five games postponed.

As of now, top-ranked Gonzaga (20-0, 11-0 West Coast Conference) has just two games left on its regular-season schedule. The first is Thursday at home against St. Mary's, followed by Saturday's visit from San Diego.

All but one of the Bulldogs' wins have come by double-digit margins, the outlier being an 87-82 win against West Virginia on Dec. 2.

Oklahoma State was the top vote-getter among unranked teams after checking in at No. 23 last week. The Cowboys will have a chance to play their way back in if they can beat Iowa State on Tuesday and Baylor on Saturday.

The same is true of Rutgers, which fell out from No. 25 last week but visits Michigan on Thursday.