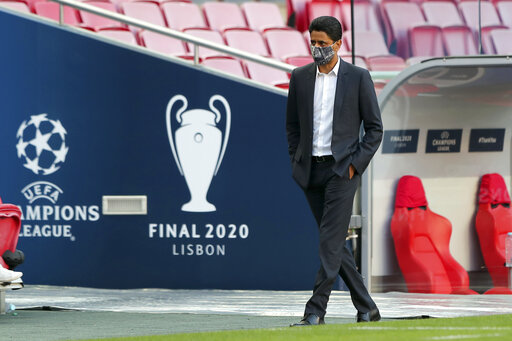 The Swiss attorney general's office said Tuesday it appealed to the Court of Appeal of the Federal Criminal Court against a ruling given in October.

Al-Khelaďfi, the president of Champions League runner-up Paris Saint-Germain and a member of UEFA's executive committee, had denied a single charge of inciting Valcke to commit aggravated criminal mismanagement while FIFA's secretary general.

That charge related to Valcke getting rent-free use of a vacation home on an Italian island the court said was bought in 2013 by Qatari interests with Al-Khelaďfi's help.

Valcke was cleared of a criminal mismanagement charge but found guilty by three judges in a separate matter not involving Al-Khelaďfi.

He was given a 120-day suspended sentence for forging documents linked to alleged kickbacks totaling 1.25 million euros ($1.5 million) from World Cup broadcasting deals in Italy and Greece. Valcke was acquitted of the most serious charge of bribery.

The two-week trial in September was the first completed criminal proceedings in Switzerland among at least 25 opened by federal prosecutors since 2015 in their wide investigation of FIFA and international soccer officials.

The federal prosecution office said it appealed against the verdicts this month after receiving the judges' full written verdict in January.