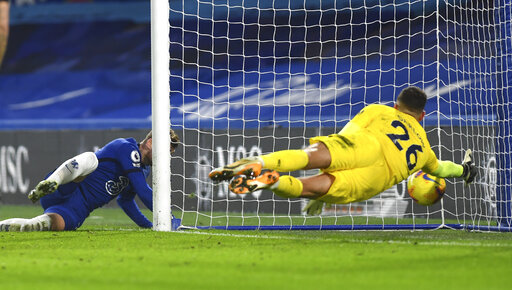 LONDON (AP) - Timo Werner's first goal in 15 Premier League games helped send Chelsea back into the top four with a 2-0 victory over Newcastle on Monday.

New Chelsea manager Thomas Tuchel had insisted only a goal could restore Werner's confidence and now the west London club will hope the summer signing can rediscover his top form.

Newcastle couldn't replicate its performances from recent wins over Everton and Southampton and is just one place and seven points above the relegation zone.

Tuchel handed Kepa Arrizabalaga his first league start since October, having insisted the goalkeeper has a "new start" under him at Stamford Bridge. However, Kepa was hardly tested by Newcastle.

Tuchel, who has now overseen four straight league wins, also picked Tammy Abraham to start up front instead of Giroud but the striker had to limp off with an ankle problem after just 20 minutes.

Werner then finally found the net eight minutes later, tapping in at the far post after Giroud had failed to connect with a high, hanging cross.

Newcastle rarely threatened a comeback in the second half, although Joe Willock drew a save from Kepa with a flicked header from Ryan Fraser's cross.