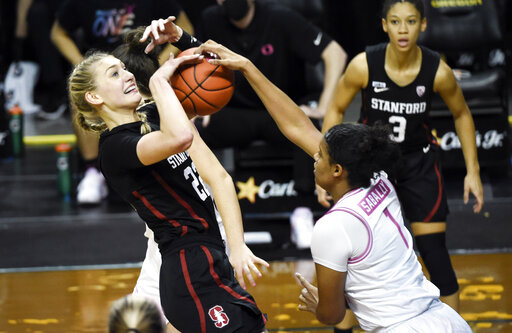 Taylor Mikesell scored 13 points to lead the Ducks (12-5, 9-5), who sit fourth in the conference. Nyara Sabally added 12 points and seven rebounds before fouling out, and Te-Hina Paopao had 11 points and nine rebounds.

Oregon trailed by 15 in the first half but tied it at 47 on a 3-pointer by Erin Boley with 8:34 left in the game. Sabally scored four straight points to give the Ducks their first lead at 51-49 with 6:18 left to go.

After Brink tied it, Boley drove for a basket to put the Ducks ahead 53-51 with 4:28 left to play. Sabally gave Oregon its biggest lead at 58-53 with a basket before Hull hit a 3-pointer.

Mikesell missed a 3-pointer, but Stanford's Lacie Hull missed two free throws with 12.3 seconds left to play. Paopao was called for traveling with 2.5 seconds left before the Cardinal ran out the clock.

Stanford led 20-16 early in the second quarter before Brink scored six straight points. After Sabally scored for the Ducks, the Cardinal rolled off seven straight points to take a 33-18 lead.

Oregon followed with the final eight points of the first half. Stanford scored six straight points early in the third quarter to pull ahead 39-28, but Oregon close within 43-41 on a 3-pointer by Mikesell late in the quarter.

Stanford: The Cardinal dropped one spot in the AP poll Monday but still look like one of a handful of top contenders to win the national title after being listed No. 3 in the NCAA Tournament projections released by the selection committee. The Cardinal have won eight straight since losing back-to-back games. Stanford is 4-1 against ranked opponents, including a season sweep of the Ducks.

Oregon: The Ducks have not lost to an unranked team all season but lost all five games against ranked foes. Oregon dropped two spots in the national rankings on Monday but were ranked No. 11 in the NCAA projections released Monday night.

Stanford: The Cardinal wrap up the regular season with three straight home games, beginning with Arizona State on Friday.

Oregon: The Ducks face their final ranked foe of the regular season when they visit No. 8 UCLA on Friday.